How to provide 24×7 support with ConnectWise Manage and OnPage

If you’re an MSP and you’re not providing 24x7x365 IT support, you’re cheating your clients out of services they really need to keep their businesses afloat and stay productive.

This point is reiterated when reviewing how to implement after-hours alerting for MSPs that use ConnectWise. These MSPs also get afterhours alerts but these alerts are in the form of tickets. How can tickets be turned into after-hours support vehicles?

We have put together a white paper that aims to explain how MSPs can both improve their offerings and ease the pain of after-hours service by:

Alerts policies are decided based on what the client and MSP thinks are important parameters to monitor. If data points exceed the desired metrics, it might be necessary to create an alert. Or not. The issue though is that alerts can easily inundate afterhours personnel. Consequently, it is important to consider and establish alerting thresholds and decide what really needs an alert and what can wait until morning.

USE A DIGITAL ON-CALL SCHEDULER FOR AFTER-HOURS SERVICE ROTATIONS

A little bit of organization goes a long way. MSPs and their teams need to work together to set a schedule that works for everyone, with work being distributed equally. The nature of after-hours service is volatile and one cannot predict the kinds of emergencies that might pop up which is why these schedules need to be flexible.

Peter Drucker is often quoted as having said that:

You can’t manage what you can’t measure

This is equally true in managing after-hours critical alerts. After the alert has been responded to and remediated, you need to look back at the situation and reconsider if the alert was triggered and responded to appropriately.

MSPs should ask if: 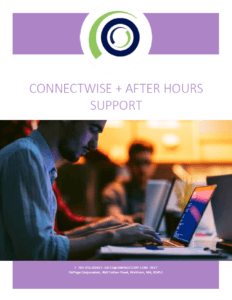