COTS – the Central Ohio Trauma System relied on the OnPage Priority Messaging Alerts System to a help disseminate accurate and timely situational awareness during the sub-zero temperatures of last winter’s Polar Vortex. And, it relies on OnPage today to help save lives whenever disaster strikes.

In the winter of 2014, the Polar Vortex covered much of the United States and temperatures in Ohio plummeted to record lows. The Central Ohio Trauma System (COTS) received numerous requests from central Ohio healthcare agencies for immediate and accurate communications about an evolving medical emergency.

A water main break occurred in one of our major cities, affecting one of our hospital systems causing the shut down of  the entire water supply to the hospital,” recalled Kelsey Blackburn, Critical Incident Response Planner for COTS. “At that point, the main issue was not that they didn’t have power – because they had their own generators – it was because without water they couldn’t warm their hospital, because they needed water for their boilers.”

The hospital, with over 300 patients, was contemplating evacuation. But that wasn’t all! Other hospitals and patients in the central Ohio region could also be affected.

During the Polar Vortex, many of our healthcare agencies in our region had specific needs or requests for information,” said Kelsey Blackburn. “With only two staff members on rotation and multiple requests, (OnPage) enabled our partners to send an email to the COTS Healthcare  Incident Liaison (HIL) staff, and then receive an email confirmation that we had received it. It allowed them to see that we were in the process of returning calls.”

COTS HIL is a conduit for disseminating accurate and timely situational awareness, resource management, and acts as a liaison between the medical community, at the institutional level, county level, regional level and the state level.

Since being incorporated in 1997, COTS’ mission is to reduce injuries and save lives by improving and coordinating trauma care, emergency care, and disaster preparedness systems throughout 15 counties in central Ohio. Immediate and reliable communications between COTS and its network of 31 hospitals, emergency responders, and other medical personnel plays a critical role in helping the community work together when disaster strikes.

Kelsey Blackburn said, “During a disaster, the ability for our end users to provide information directly in the paging message makes for an efficient response to our stakeholders…. Having a reliable messaging system to allow healthcare agencies to contact us anywhere and anytime expands our contact capabilities.” 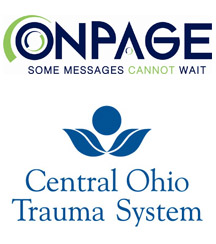 “The ability for a health care facility or individual to communicate with the HIL via the paging system through email communication, rather than phone communication, was imperative,” stated Kelsey Blackburn. “For us to have documentation through the email paging system provided a crucial asset during this emergency. The email feature is huge, because with phone communications, sometimes things can be misinterpreted. Going from an antiquated (pager) system to OnPage Priority Messaging Alerts System has proved itself as invaluable to our operations as the COTS HIL. Communications are quicker, clearer and more precise with the OnPage system.”

Prior to using OnPage, COTS carried pagers that had to be handed off to personnel. Kelsey Blackburn stated: “We started looking for a new system that was easy to hand off, that had a wide coverage area, because a couple of the staff were not able to receive pager coverage in their area. Our old pager system could only offer us sporadic coverage at best. We were looking for something that we could utilize with our current mobile devices. We wanted to be able to turn it on or off easily (eliminating the logistics of a physical handoff).”

Kelsey Blackburn said, “During a disaster, the ability for our end users to provide information directly in the paging message makes for an efficient response to our stakeholders…. Having a reliable messaging system to allow healthcare agencies to contact us anywhere and anytime expands our contact capabilities.”

“With the antiquated pagers (that we used in the past), there were huge delays some days. One pager would get the page, and 2-3 hours later the other pager would get the page. Because the second person that got the page may not have realized that the page had been answered two hours prior, it caused confusion,” Kelsey Blackburn recalled. “The pager wasn’t a reliable service. Now with the OnPage Priority Messaging Alerts System the two individuals get the page simultaneously.”

The Polar Vortex medical emergency passed – and fortunately, the other hospitals in the central Ohio region were unaffected by the water main break. Kelsey Blackburn and other COTS staff experienced the benefits of OnPage priority messaging for keeping updated with accurate, immediate, and verifiable communications during a disaster, trauma, or emergency.

After four month of testing the OnPage critical messaging system, Kelsey Blackburn summed up her evaluation by stating, “It has increased our redundancy, our reliability, and provided a better option and opportunity for our users and stakeholders – and I say stakeholders because we do service so many health care organizations and provide support to them. I just think that OnPage is the wave of the future.”